​In the fall of 2004, April and her husband moved to Katy, Texas to assist Director Kandy Gailey with growth and success of the Morton Ranch High School Dance Department. Since the opening of school Mrs. Hunt has directed the Belles in two Houston Thanksgiving Day Parades, created and implemented the Belles Give Back community outreach program, participated in the Super Bowl 51 Halftime Show with Lady Gaga and directed her team towards four National Champion Titles. She is a former staff captain and current staff member with American Dance Drill Team School. April was recognized as 2015 Morton Ranch High School Teacher of the Year and is the campus department chair for Fine Arts.

She is a proud mother of two children; Ryleigh and Ayden Hunt. 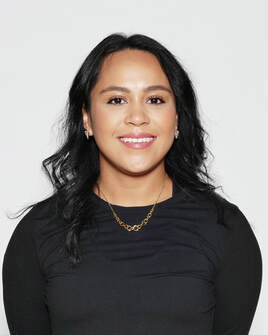 Maria Alejandra Tafur, Assistant Director
Ms.Tafur was born and raised in Bogota, Colombia. At the turn of the century her family and her moved to Katy, Texas and made it their permanent home. Ms. Tafur is a graduate of Morton Ranch High School where she had the privilege to serve as a Junior Lieutenant and the 3rd Colonel of the Maverick Belles Dance Team.

After high school she attended Texas State University and received a Bachelors of Science in Dance with a secondary teaching certificate. While in college she was part of the dance company TRU dance Project and served as Rehearsal Assistant for two seasons. As well as performing in the annual Dance Project in Austin, Texas. Her studio training includes ballet, jazz, hip-hop, modern, contemporary and improvisation from studios in Houston, Austin, Los Angeles and New York.

Since graduating High School Ms. Tafur has been choreographing for drill teams across Texas as well as doing solo and ensemble work. Now as an assistant director she loves working with the award winning Maverick Belles and is the proud director of the JV Dance Team. While back at the ranch Ms. Tafur has established written dance curriculum for the campus and under her direction the JV Dance Team has earned multiple Best in Class awards.